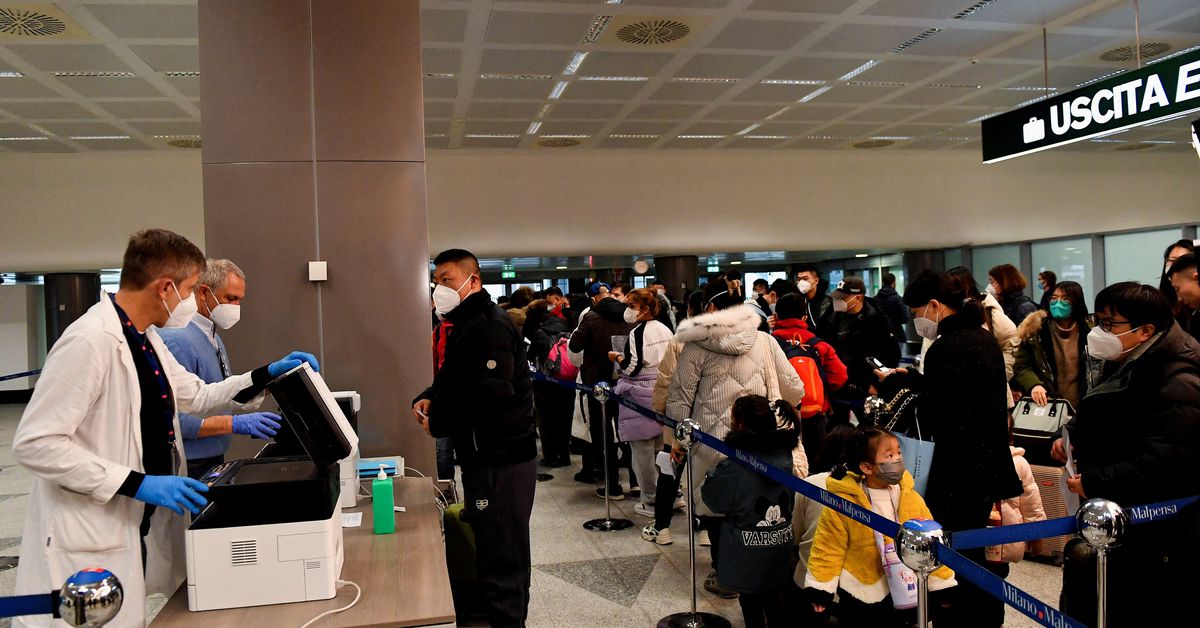 Having kept its borders all but shut for three years, imposing a strict regime of lockdowns and relentless testing, Beijing abruptly reversed course towards living with the virus on Dec. 7, and infections have spread rapidly in recent weeks.

South Korea and Spain on Friday joined a growing list of countries, including the United States, India and others, which have imposed COVID tests for travelers from China over concerns about the scale of its COVID outbreak and skepticism over Beijing’s health statistics.

Malaysia said it would screen all international arrivals for fever.

“The real intention is to sabotage China’s three years of COVID-19 control efforts and attack the country’s system,” state-run tabloid Global Times said in an article late on Thursday, calling the restrictions “unfounded” and “discriminatory.”

China will stop requiring inbound travelers to go into quarantine from Jan. 8. But it will still demand a negative PCR test result within 48 hours before departure.

WHO Director General Tedros Adhanom Ghebreyesus said earlier in the day that the organization needed more information to assess the latest surge in infections in China, without taking a position on the issue of travel tests.

Not all countries are imposing tests. European Union members, in particular, are divided.

Over the past days, officials in France, Germany and Portugal have said they saw no need for now for new restrictions, while Austria has stressed the economic benefits of Chinese tourists’ return to Europe.

Global spending by Chinese visitors was worth more than $250 billion a year before the pandemic.

Acting a day after EU health officials failed to agree on a joint course of action, Spain followed Italy’s lead to become the second of the bloc’s 27 members to require tests for travelers from China.

[1/4] Passengers wait in a queue, after Italy has ordered coronavirus disease (COVID-19) antigen swabs and virus sequencing for all travelers coming from China, where cases are surging, at the Malpensa Airport in Milan, Italy, December 29, 2022. REUTERS/ Jennifer Lorenzini

“At a national level, we will implement airport controls requiring all passengers coming from China to show a negative COVID-19 test or proof of a full vaccination course,” Health Minister Carolina Darias said.

EU health experts are expected to hold a crisis response meeting next week, according to an EU source.

In the meantime, EU health chief Stella Kyriakides wrote to the bloc’s health ministers to suggest they immediately scale up genomic sequencing of COVID-19 infections and monitoring of waste water, including from airports, to detect any new variants given the virus surge in China.

The US Center for Disease Control and Prevention is also considering sampling wastewater from international aircraft to track any emerging new variants, the agency told Reuters.

The United States has raised concerns about potential mutations of the virus as it sweeps through the world’s most populous country, as well as over China’s data transparency.

A shipment of 11,500 doses of the BioNTech (22UAy.DE) vaccine arrived last week, enough to give one shot each to half of the 20,000 or so German nationals residing in China.

The lifting of restrictions in China, after widespread protests against them in November, has overwhelmed hospitals and funeral homes across the country, with scenes of people on intravenous drips by the roadside and lines of hearses outside crematoria fueling public concern.

Health experts say China has been caught ill-prepared by the U-turn in policies long championed by President Xi Jinping.

They say the elderly in rural areas may be particularly vulnerable because of inadequate medical resources. Next month’s Lunar New Year festival, when hundreds of millions travel to their home towns, will add to the risk.

China, a country of 1.4 billion people, reported one new COVID death for Thursday, same as the day before – numbers which do not match the experience of other countries after they reopened.

UK-based health data firm Airfinity said on Thursday around 9,000 people in China are probably dying each day from COVID. Cumulative deaths in China since Dec. 1 have likely reached 100,000, with infections totaling 18.6 million, it said.

China’s chief epidemiologist Wu Zunyou said on Thursday that the difference between the number of deaths in the current wave of infections and the death rate for the same period in pandemic-free years would be studied to calculate the “excess mortality” and gauge any potential underestimate of deaths from COVID-19.